Nico Langmann is a 23-year-old wheelchair tennis player from Austria who achieves impressive results as a professional athlete and strives for even better ones. Although he is in a wheelchair since his early childhood, it didn’t prevent him from living life just like any other kid and now a young person. Nico’s optimism and cheerful personality will charm you instantly. He truly is an inspiring young man from whom we can learn a lot, especially when it comes to overcoming obstacles and focusing on what you can do, rather than what you can’t do.

Langmann recently became a Sport World School supporter, so we interviewed him to get to know him better. We talked about his upbringing, developing such a strong and positive mindset, and also about wheelchair tennis and his professional career.

You grew up in a wheelchair because of a car accident that left you paralyzed. But, your entire upbringing was nothing like people would expect. Can you tell us something about your childhood?

When I talk about my childhood, there is actually nothing really special to talk about – and I think that’s the beautiful thing about it. I lived a life just like everyone else. I went to a normal Kindergarten and normal schools, where I was often the only disabled person around. That’s why I didn’t see myself as different, I was one of them. When my friends went to the soccer field, for example, I went with them, being the defender who ran into the opposing player whether he had the ball or not. I did everything all the other kids did as well. So again, the special thing about my childhood was its normality.

We heard an interesting story about a clinic in Russia where they taught you how to overcome obstacles by using – someone would say – rigid methods. But, it is an important life lesson, but can you tell us more about how it all happened?

Well, that is indeed an interesting story. You see, after suffering a spinal cord injury, one has to get adapted to this new situation and has to learn many new skills needed. That normally happens in a special rehabilitation center, designed for these needs. But the Austrian centers are not suited for treating children, they wouldn’t even take us, so we had to search for other solutions. In retrospect, I now say luckily my parents got the information that there is a clinic in Moscow, that is willing to take me and work with me through rehabilitation. And I can tell you, it was a Russian rehabilitation. They didn’t believe in making my surroundings, my life accessible, they wanted to put as many obstacles into it as possible, so I will learn how to overcome them. For example, I wasn’t allowed to use a wheelchair at home until I was around 12 years old – I had to learn how to get from one place to another without it. And it taught me to feel free and independent from a young age, plus, it made me strong from which I definitely profit now in my profession.

Having such a positive look on life and focusing on what you can do rather than what you can’t do is pretty mature thinking. What was crucial for developing such a mindset at such a young age?

Thank you for your kind words. I am not entirely sure what led me to this point where I am right now, but I think that I simply got very lucky with the environment I grew up in. As I said before, I never had a reason to see myself differently than anyone else, I mean, I am human just like anyone else. And being human, there are so many possibilities, so many options for your life to be fulfilled, the wheelchair really doesn’t matter in the important things of life. Sure, I can’t climb upstairs, but if you measure your quality of life by the ability to climb stairs, you have a pretty boring life.

One of the first times when you had to deal with the fact that society looks at you differently was when you started school. Can you tell us what happened?

Yes, true. That was the first time that I realized people could see me differently. I wanted to attend the same elementary school as my brother did, so when he entered that school two years before myself, our mother made sure that they would take me as well two years afterward. We reserved a spot. But when it came to applying, the headmaster told us that enough ‘normal’ children had already entered, the disabled kid was no longer needed. So I had to go to another school. I was excluded from something I wanted, just because I had a different way of walking. I was excluded because I was rolling. 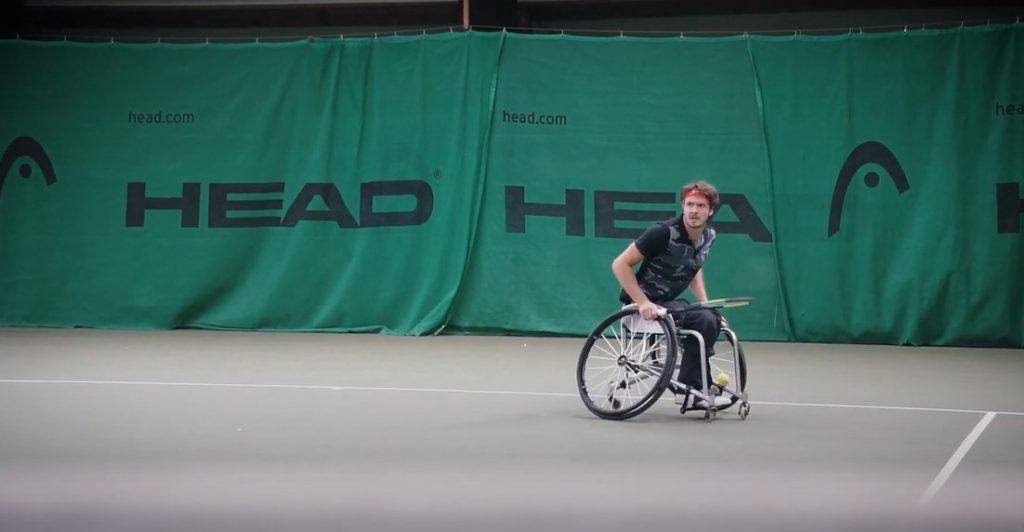 People in a wheelchair, whether they are grown-ups or kids, always face some sort of discrimination in life. How did you learn to deal with that, was it tough? Do you maybe have some advice for young people who are facing discrimination on how to overcome the opinion of other people and move on?

How did you finish school? Did you go to a regular or online school?

I went to a regular school, but the more professional I got with tennis, the less I attended school.

Yes, I have! When I was younger, I used to learn languages online while I was away for tournaments, and nowadays, I am even doing an online study program for business, which is the only possible way for me to have an education, due to all the traveling.

Do you think that online learning can be of help to children who are in a wheelchair?

I think it can be of help to everyone, and I think that it will be way bigger in the future. But of course, in systems where people with disabilities don’t have unlimited access to education, it can be very beneficial.

Let’s switch to tennis. When did you start playing tennis, and at what point did you decide to pursue a career as a professional athlete?

I started playing tennis in a very similar way as I played soccer with my friends. My family always used to play, and when I was around seven years old, I got tired of just watching. So I took a racket and demanded that they’ll let me join. Didn’t hit a single ball in the first hour or so, but already had a long of fun, so I continued. And being the ambitious child I was, I soon wanted to play matches, to compete at tournaments. So I did, I lost, I hated losing, so I trained more, I started winning. And I loved it all and still do.

Aside from obvious, how much wheelchair tennis is different from tennis? What are some additional skills that you had to develop and work on so you can compete on a professional level?

The cool thing about wheelchair tennis is that it isn’t really different. The court is the same size, the net is the same height, the rules are the same. The only difference is, that the ball is allowed to bounce twice. But because it is so similar, it is the most inclusive sport there is, because you can simply hop on the court and play with anyone, no matter the disability. And just as in ‘normal’ tennis, being a professional is tough. It takes a lot of hard work, physically and mentally, to even be able to compete at the highest level, and then during a match, during every point, it takes mental strength and full focus. So it is easy to say, tennis has taught me a lot.

How often do you train, and how does a day in your life look like?

When I don’t compete at tournaments, which I do around 20 weeks a year, I have three training sessions a day, two times tennis, and one physical training session. So in total, I have about 6 hours of active training a day but stretching, healthy eating, and a lot of sleep are important factors in an athlete’s career as well, so I try to use every hour of the day to get better.

What are some of the moments from your tennis career that you are most proud of? And what motivates you?

Qualifying for the Paralympic games and getting into the Top 20 ranked players worldwide are definitely very beautiful memories. But I hope to achieve much more than that. That’s what motivates me every single day. To give it my best. To not look back onto my career thinking, I could have done more.

You developed quite a friendship with Dominic Thiem. Did you ever get some good advice from him or any other world-class tennis player?

Yes, his dad is my coach, so we see each other nearly every day. And to be honest, we don’t really talk about tennis too much when we are off the court. But of course, we sometimes do talk about it, and I also had the chance to talk to players like Rafael Nadal, Novak Djokovic, or Andy Murray when we competed at the same tournaments, which were always very inspiring moments for me.

What are your goals in life? Regarding tennis, but also other things?

Uh, that’s a deep and difficult question. But I guess it is to have had a positive impact on the world when my life has ended.

What advice would you give to young tennis players or young people in general?

I am only 23 years old, I should be the one asking for advice, not giving some. But if my life has taught me one thing, it is that there is always a way to get happy, no matter the situation. Search for that way.